12.54% of Clapham and Lambeth is Concreted over ... Building Plot Dilemma or Not? 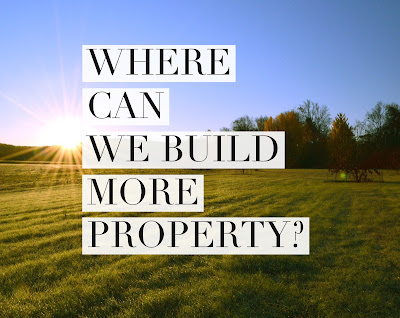 Well the fallout from the recent Budget is still continuing. I was chatting to a couple of movers and shakers from the Clapham area the other day, when one said, “There isn’t enough land to build all these 300,000 houses Philip Hammond wants to build each year”.

...and if you read the Daily Mail, you would be forgiven for thinking the Country was at bursting point ... or is it?

It was 60 years ago the first satellite was launched (Sputnik). All the Superpowers have used them to take high definition pictures of each other for decades, but now satellites and their high-powered cameras are being used for more peaceful purposes. The European Environment Agency (EEA) have been taking high definition pictures of the UK from outer-space to give us a focused picture of what every corner of the Country really looks like … and the findings will come as a surprise.

As my blog readers know, I always like to ask the important questions relating to the Clapham property market. If you are a Clapham landlord or Clapham homeowner, this knowledge will enable you to make a more considered opinion on your direction and future in the Clapham property market. Like every aspect of all economic life, it’s all about supply and demand, because over the last twenty or so years, there has been an imbalance in the British (and Clapham) housing market, with demand outstripping supply, meaning the average value of a property in Lambeth has risen by 673.89%, taking an average value from £67,800 in 1995 to £524,700 today.

Using the information from the EEA and data crunched by Sheffield University with their Corine-Land Cover project, I posed them a few questions about the local area, interesting questions I would like to share with you … 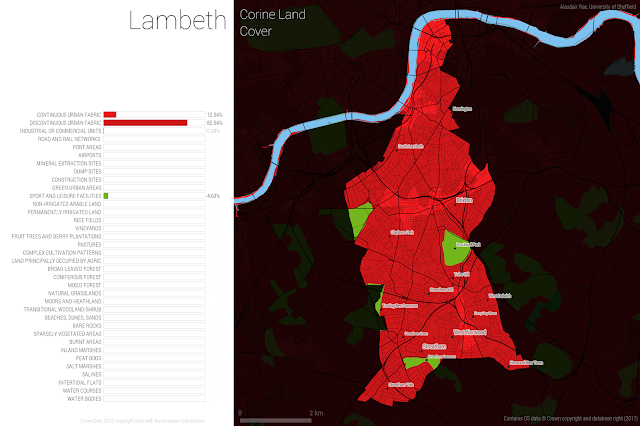 1. What proportion of the whole of Lambeth is built on?

95.08%. Now I doubt that came as much of a surprise! In the study, land classified as ‘urban fabric’ defined has land which has between 50% and 100% of the land surface is built on, (meaning up to a half might be gardens or small parks, but the majority is built on).

2. How much land is intensively built on locally?

3. So how is the land used locally?

Clapham and the surrounding areas might be greener than you think! In fact, I read that property covers less of the UK than the land revealed when the tide goes out. The assumption that vast bands of our local area have been concreted over doesn't stand up to inspection. However, the effect of housing undoubtedly spreads beyond its actual footprint, in terms of noise, pollution and roads.

Now I am not suggesting for one second we concrete over every inch of the locality, but the bottom line is we, as a country, are growing at a quicker rate than the households we are building. I appreciate the emotional effect of housing is greater than other land use types because most of us spend the vast majority of our time surrounded by it. As Brits, we live our lives driving along roads, walking on footpaths and working and living in buildings meaning we tend, as a result, to considerably overemphasise how much of it there is.

In fact, I was only flying home recently back from a short break abroad, when I looked down and I was reminded just how green Britain actually is!

The bottom line is Clapham people and the local authorities are going to have to put their weight into building more homes for people to live in. There is going to have to be some give and take on both sides, otherwise house prices will continue to rise exponentially in the future and Clapham youngster’s won’t be able to buy their own Clapham home, meaning Clapham rents and demand for private rented accommodation in Clapham can (and will) also grow exponentially.

I hope you enjoyed reading. If you are keen to take things further, be it to start from scratch, or do something a bit more interesting with your current portfolio... Start the conversation on email. I'd love to meet you in person of course at this month's Clapham Property Meet, so do come along. Click here for tickets and more info.
building Clapham Lambeth Property