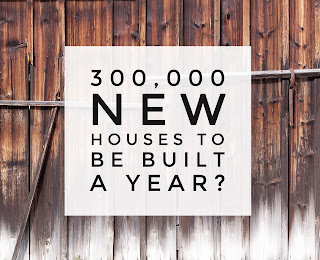 I miss the good old days of George Osborne as Chancellor, with his hardhat and hi-vis jacket. He must have visited every new home building site in the UK with his trademark attire! For the last few years, the nearest Philip Hammond got to donning a ‘Bob the Builder’ outfit was at his grandchild’s birthday party. However, with what appears to be a change in focus by the Tories to ensure they get back in power in 2022, they appear to have fallen in love with house building again with the Chancellor’s promise to create 300,000 new households in a year.

Nationally, the number of new homes created has topped 217,344 in the last year, the highest since the financial crash of 2007/8. Looking closer to home: in total there were 1,135 ‘net additional dwellings’ in the last 12 months in the London Borough of Lambeth Council area, a decrease of 17% on the 2010 figure.

The figures show that 96% of this additional housing was down to new build properties. In total, there were 1,088 new dwellings built over the last year in London Borough of Lambeth. In addition, there were 364 additional dwellings created from converting commercial or office buildings into residential property and a further 71 dwellings were added as a result of converting houses into flats.

While these all added to the total housing stock in the London Borough of Lambeth, there were 388 demolitions to take into account.

I was encouraged to see some of the new households in the Clapham area had come from a change of use. The planning laws were changed a few years back so that, in certain circumstances, owners of properties didn’t need planning permission to change office space in to residential use.

With the scarcity of building land available locally (or the builders being very slow to build on what they have, for fear of flooding the market), it was pleasing to see the number of developers that had reutilised vacant office space into residential homes in the local council area. Converting offices and shops to residential use will be vital in helping to solve the Clapham housing crisis especially, as you can see on the graph, that the level of building has hardly been spectacular over the last seven years! 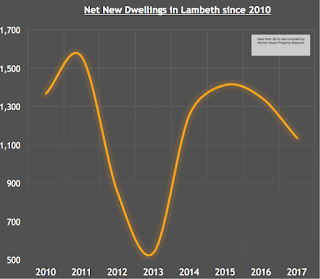 Now we have had the autumn budget, Theresa May and Philip Hammond have set out their stall with housing as their key focus. I was glad to see the Government introducing a variety of changes to improve housing, including more funding for the supply side and an injection of urgency into the planning system.

The biggest question is, just where are the Government going to build all these new houses? Maybe a topic for a future article?

Back to the main point though and the focus on the housing market by the Tory’s is good news for all homeowners and buy to let landlords, as it will encourage more fluidity in the market in the longer term, sharing the wealth and benefits of homeownership for all. However, in the short term, demand still outstrips supply for homes and that will mean continued upward pressures on rents for tenants.

I hope you enjoyed reading. If you are keen to take things further, be it to start from scratch, or do something a bit more interesting with your current portfolio... Start the conversation on email. I'd love to meet you in person of course at this month's Clapham Property Meet, so do come along. Click here for tickets and more info.
Clapham new build property market