Update on Buy to Sell deal - with video (that works this time)!

By Jeroen Hoppe - January 05, 2017
I was disappointed to see that the video I posted in my last update didn't work, so do CLICK HERE TO SEE THE VIDEO of the deal in my last post, the hold and rent project in Camberwell.

On to the next update then. You'll remember that I had bought another property at auction. Again a lovely deal, this time purchased for £160,000. Again slightly further out than I normally venture (Thornton Heath). A property riddled with "problems" as some people refer to them as. I only see challenges, and moreover, an excellent way to pay less for an investment property. It had been on the market with two agents for over a year... what could possibly be wrong?

Well, problems included Japanese knotweed, modernisation required and the block was looking tired. No problem too big of course, but one thing I did notice was that the property used to be a 1bed! The previous owner (who had been repossessed) had cheekily split the living room to create an extra bedroom. Normally this would make the property very difficult to sell as it's a breach of the lease.

So what did I set out to do? Investigate further... After reading the legal pack in full detail it had emerged that there was actually a treatment plan in place for the knotweed (so that's one problem down) and the freeholder had given consent in writing for the internal alterations - another problem down. So the only problems remained were cosmetic ones. Lovely. Armed with this information I went to the auction room and the bidding commenced at £140,000. I started the bidding at £150k when the first of the two bidders had failed to increase and I outbid her £159,000 only for the gavel to fall at £160,000. I had exchanged contracts, excellent!!

Upon bringing the memorandum of sale back to my solicitor he asked whether he'd like me to complete it sooner than the planned 28 day timeline if possible. This was March and the stamp duty was going up considerably in April, so I was more than happy for him to act quick and save me on the purchase.

A mere week later I had the keys in my hand and the purchase had gone through. I made a schedule of works and a specification with the builder I had appointed and off he went, turning a landfill into a palace.

CLICK HERE to see a video of the before and after pictures. 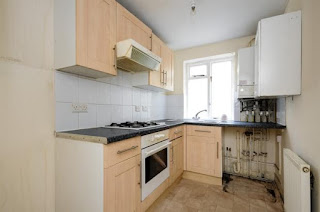 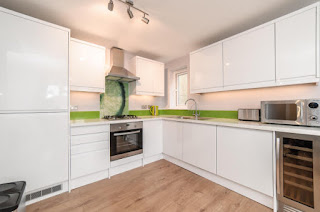 I have also made a walk around video of this project to explain what I did. Click here to watch it.

If you are interested in more videos as I make them please subscribe to my YouTube channel.
Naturally the proof is in the eating of the metaphorical pudding - after having booked a 30% return on this deal we can safely say that, even after sitting on the sidelines advising for so long, my clients appreciate my input and say that I certainly know my onions when it comes to property investment. So if you would like to grow your portfolio, or start one, or would like general advice related to property, lettings and so forth of any kind - do get in touch via Facebook, LinkedIn or old fashioned email. Don't forget, you can also meet me in person at the Clapham Property Meet. This month I will be doing a talk on sourcing the best deals through agents and revealing some of the estate agency industry's best kept secrets...
buy to sell refurbishment