Thirtysomethings to leave London en masse - what does this mean for your BTL in Clapham?

By Jeroen Hoppe - October 03, 2016
You will no doubt have seen many news outlets spouting that after 10-15 years of London the average person simply "gives up" and moves out. So what are they giving up on, exactly? In the words of Samuel Johnson: "...when a man is tired of London, he is tired of life; for there is in London all that life can afford." Not so much so today however...

Property
As you will know the tenant population is ageing. If you have been letting long enough you will have found over the past decade that student digs that were let to 20 year olds are now being occupied by first or even second jobbers; two bedroom flats that were once let to couples looking for more space now more often occupied by a couple plus one, and so on. Renting has become more expensive, and in an everlasting pursuit of affordability thirtysomethings are now moving out to live in property with more "acceptable" square footage of floor space. After all what is acceptable in zones 1-2 is considered a broom cupboard at the end of a commuter train.

Jobs
The main factor to consider in such a move is of course employment. The vast majority of people that move out factor in a lengthy commute when making their decisions. You will often see property advertised as "xx minutes from yy London Station." People ignore the transfer times between the 4 lines they cross, along with the 2 buses and 15 minute walk at the end of it. In the rain of course. Some of course find employment out of London, but for those that cannot as yet they will be forced to stay local(-ish).

Value for money
There is surely something to be said for value - tenants will certainly find this further out. After all they've been paying so much rent they hardly have enough savings to afford a London property. Value is a perception though and if people are moving out of London for this, I would argue that value can still be found in London. Read on.

Investing wisely
Pretty much anywhere you go in South London there will be a transport hub close by. "Closeby" is of course a relative term. I have seen vast increases in capital values in areas that are the furthest away from any tube or train station. Why?? Well quite simply those are the cheapest properties. Take a map and try to find the furthest points away from stations. Generally speaking those will be the cheapest, and hence buyers will flock there as it is the most affordable. Queue big capital gains and rent rises. I've been tracking a few of these spots, namely the patch around the South Circular/Brixton Hill junction as well as some of the estate on the South Circular, even having missed out on a beautiful opportunity to acquire a 3bed to turn into a 4bed at auction over the last few months. I can tell you now that capital values are up 20-30% on last year. Investing further out pays dividends. This goes for rents too of course; the best investments are of course those where you can add value by adding a room of some sort, but as mentioned in previous posts this doesn't always have to be by adding square footage!

In summary there are still parts of Clapham (or other parts of South London where you are investing) that are untapped... Look for places further from the station. The increase in popularity of cycling is helping fuel this demand of course, as are improved bus services and so on. There is no need for mass panic among investors that everyone is fleeing London. Tenants and buyers flock to affordability. Cater for this for big returns. 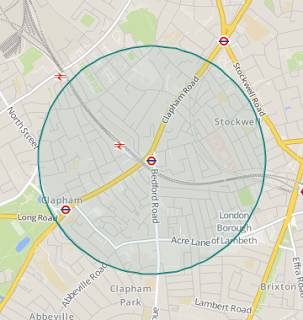 If you are looking to make an investment decision then do get in touch and let's start the conversation. I have years of experience building portfolios for clients and can help you too. Having secured 4 properties this year, two of which are completed, I have a proven track record of investing other people's money as well as my own. You can phone me or why not come along and meet me in person at the Clapham Property Meet on Wednesday 26th October. Do book a ticket promptly though as places are limited. We are having another social evening of networking along with quality content from my colleague Trevor Cutmore, guest speakers Anna Harper and Stefan Canavan (specialists in London Developments) and of course me. You can book tickets at www.claphampropertymeet.co.uk.