High Yield HMOs vs Low Yield New Build - which is best in Clapham?

An often discussed metric in property, but what is it exactly?

Well there's different kinds of metric to measure the performance of an investment, and gross yield is probably the most basic form of measurement.

So what does it tell us? Well it tells us, broadly, how the investment will perform. Generally a yield of 4%-6% is the going rate for a London property, even less in Central London, more on the outskirts as generally the "safer" an investment the lower the yield. For reference let's remember the interest you get from your savings will be 0.5%-1%. But "safe as houses" varies, as does yield!

So let's drill this down a bit further. The above is only really relevant if you buy the whole property with cash and you ignore all the annual expenses. Truth is you won't generally buy with cash and you have to pay for letting fees, voids, repairs and insurance (and a lot more, I'm sure). So does that mean we have to measure net yield? Maybe. You can't predict all the expenses you're going to incur, but if we compare two opposite properties the picture will become clearer.

I was pitched a new build property in this development called Camberwell On The Green the other day. A lovely new build development - you'll never guess where it was. Anyway, a 2bed there was being sold at £695k with a £2000 service charge and an estimated rent of £2200. Estimated. Real rents probably about £1700-£1800pcm. Service charge of £2000p.a. and so forth. For the sake of argument I'll base the numbers on a rent of £1800pcm.

Let's compare this to a 3 bedroom house in a similar area that you could let to 5 sharers, using both reception rooms. Yes more maintenance, a bit more legwork when letting but let's compare them and see how they fare just for this example.

I prefer to use the Return on Capital Employed metric because this will take into account a few other factors such as:

When I run some numbers through my spreadsheet such as projected income and expenditure I actually find that the gross yield for my hypothetical HMO is 5.57%. Respectable, but despite leverage this actually drops to 5.16% ROCE after taking into account the bills and management costs. Still miles better than the new build though: 3.09% gross yield and 1.1% ROCE.

So why should you invest in a new build? Well, above points to "you shouldn't" as it's the least likely to cash flow. In fact, I had to run the numbers on a 42% loan to value scenario because the rent achieved would need to cover 145% of the mortgage payment. And unless you put down 58% deposit it won't, and you'll find difficulty in finding a lender. So leverage will hold you back if new build is the way you are thinking of going. Service charges are enormous vs repairs on an older place (and service charges are guaranteed, you may be lucky and not need repairs).

The other point that I'd stress is that a new build is very niche in the sense that they will often be much more expensive than other local properties - developers will command a premium for their "brand new" flats. A 2bed in Camberwell goes for anything from £350k upwards, a period one for about £550,000, the new builds are being sold at a far higher price! However when you come to sell it's not brand new anymore. Remember that new car you bought? Right. Property is same same but different. If you hang on to a new build for long enough they will certainly go up in value like the rest of the market, but the first 5-10 years you will find that the value doesn't change much, in fact it probably goes down a bit because the developer is still finishing off the development, there may be a few unsold and if you decide to sell that particular day you would have to compete with the developer, so probably would have to sell at a cheaper price. Each development is different of course and there is certainly a market for people reserving a particular unit and then trading it on to someone else, but this is more common for developments with hundreds of units and built over 3-5 years. Let's ignore this for now. 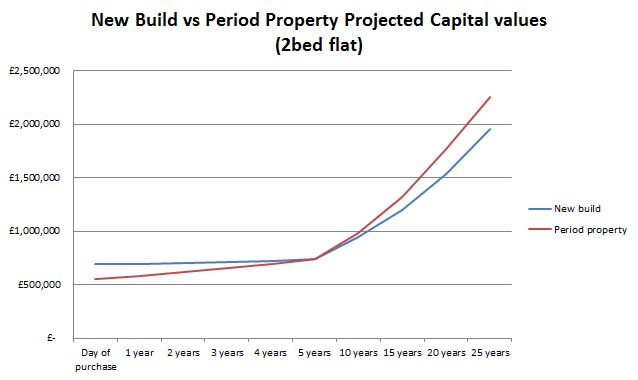 In summary the values will go up at the same rate, but only once they've "normalised" and the premium is gone. In the same way a car's depreciation will become more reasonable once it's say 3 years old. New build is lovely and new, but if you're employing your money as an investment you will want better returns than a new build can offer you I trust! As you can see in the graph above, like-for-like comparison will see period property become more desirable in the long run, at least so is my prediction based on my years of experience.

So what to buy? Well new build if you must, they are as low maintenance as property investments come, but I would still advise putting your money elsewhere. There are plenty of developer projects where you can fund a property investor and make a 5-8% return on your money without taking any of the risk of enormous service charges and the like. If you do want to get more involved and benefit from longer term capital appreciation then buying a property to add value to in South London will most certainly offer good returns. I am currently averaging 22% return on capital employed over my last years' projects and I have two more in the pipeline which I'll tell you about in due course. If you want to hear more and how you can invest for better returns just drop me an email or come down to the Clapham Property Meet - we have an exciting talk on this month about property finance and I'll be running through my most recent deals with the audience too.